The cold winter winds whipped under the freeway overpass and a piece of paper tied to a green tent with a rubber band flapped in the wind. In big bold lettering the message on the paper read: “RESOLUTION DAY: TUES. FEB. 27th, 2018” “NOTICE TO VACATE”… “Persons who refuse to vacate the area may be subject to citation and/or arrest.” The part right before that says the City will conduct a clean-up of the area… “including the removal of all individuals”. Damn that’s rough… reminds me of the movie ‘Soylent Green’!

About a month ago this encampment tucked away under the freeway in an industrial area made it to the top of the City’s list to be “resolved”. City outreach workers have been getting folks into Navigation Centers, but more people have been showing up in need of shelter. Getting a bed is dependent on beds becoming available (mostly people being discharged back to the street to make beds available for this complaint driven system).

On the morning of this resolution a resident of the encampment was awoken by law enforcement at 7 am and told she needed to pack up and vacate. She went to wake up and inform her neighbors of the eviction that was upon them. When she returned to where she had slept the night before she found that her tent and all of her belongings were gone. City workers had tossed her possessions on the back of a flatbed truck to be disposed of. She got lucky and pulled her belongings off the truck before they were lost for good. 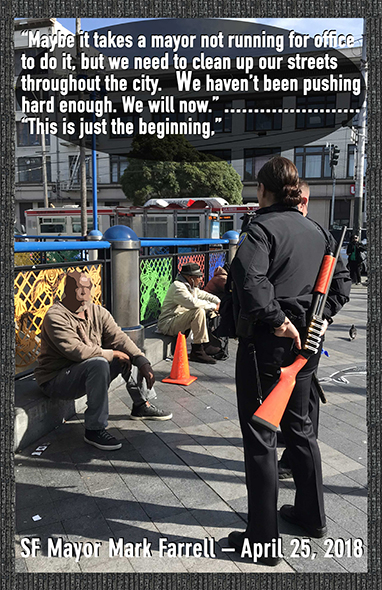 The day before the ‘resolution’ I spoke to a woman who was working with City outreach workers to get into the Navigation Center. I checked in with her during this mornings ‘resolution’ to make sure she was still getting a bed and she said she was waiting for the bed to become available, but that the HOT worker was helping her, and she was hopeful. When I got back to the office I received a distressed call from her… DPW workers threw her wheelchair into the crusher truck and demolished it. She said, “I need my wheelchair to get around!”

The Navigation Center is part of a complaint based system. People can’t just sign up on a list to get a bed there, hence the reason some might be drawn to an area getting resolved. There is a myth that people are “service resistant”, but the reality is that resources are extremely limited. The City has between 1,000 to 1,500 people waiting on the single adult shelter waitlist for a temporary bed. The ‘average’ wait for a family/child is 111 days.

In a recent SF Examiner story Jeff Kositsky, the director of the City’s homeless department explained, “He said that there are 21,000 homeless persons annually in San Francisco, of which 8,000 are newly homeless. Annually, he said The City is “only helping 2,000 people exit homelessness. That’s a big part of the challenge.” He added, “Even though we have 7,400 units of permanent supportive housing, only 800 units become available in any given year.””

How the system works is that when an encampment gets enough complaints the City will do a “resolution”. City outreach workers go out and work with folks to get them into shelter, connected to resources, treatment or a one way bus ticket out of town. Once a location has been “resolved” this location is now off limits. But let’s be honest and look at the whole picture. Nothing is resolved if the person is then discharged back to the street.

Once an area is “resolved” it then becomes a law enforcement issue to make sure people don’t go back there and “re-encamp. When they get discharged back to the street, they can’t go back to the “resolved” location. The question I repeatedly ask City officials is, “when the whole City is ‘resolved’, where are people supposed to go?”

On the national level, there is a movement away from using law enforcement to respond to street homelessness and encampments. However in San Francisco, police have been playing a dominant role in responding to our housing crisis. The newly created Healthy Streets Operation Center (HSOC) (aka. Command Center) is a collaborative effort between city departments created to respond and “resolve” homelessness related complaints. Key groups missing from this collaboration were non-profits, advocates and people experiencing homelessness.

Laura Guzman, former longtime Director of the Mission Neighborhood Resource Center in San Francisco stated, “No housing exits, access based on complaints rather than vulnerability, and shorter stays than even traditional shelters do not address our communities’ needs, but only hide visible homelessness. Most importantly, there is no community oversight. SF has a Continuum of Care that is kept in the dark on its Board, the Local Homeless Coordinating Board is left without its authority on homeless policy.”

The United States Interagency Council on Homelessness (USICH) recommends “To end homelessness for everyone, we must link people experiencing unsheltered homelessness, including people sleeping and living in encampments, with permanent housing opportunities matched with the right level of services to ensure that those housing opportunities are stable and successful.” They stressed the importance of diverse collaboration to create effective strategies and approaches to ending homelessness.

Julie Leadbetter, former director of the Navigation Center stated, “Navigation Centers have become a way to “legalize” sweeps. That’s why they want short stays, so they can force people to leave the streets by following USICH guidance that shelter or services must be offered. So in order to sweep, they make shelters to sweep to, then put them back out, to sweep them again. This is a costly investment in homeless management.” 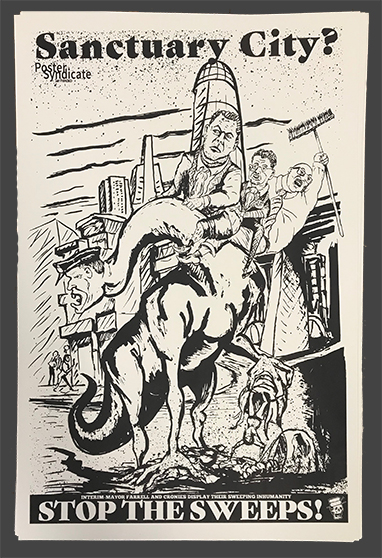 On June 29th, 2017 the City began their strategic effort of addressing encampments and placing the people living in encampments in the Mission district into Navigation Centers. They called this operation the Mission District Homeless Outreach Program (MDHOP). The goal was for SFPD, the Department of Homelessness and Supportive Housing, City outreach workers (SFHOT), Department of Public Health (DPH) and the Department of Public Works (DPW) to meet everyday at 8 am five days a week to strategize which location to focus their attention to clear encampments. No non-profit homeless service providers, advocates or people experiencing homelessness were included in this effort.

Since June 2017, the amount of tents in the Mission has gone from 256 down to about 60 tents. Based on the results of the MDHOP, Mayor Lee made the decision to replicate that model in Central Market and the Civic Center calling it “harm reduction” and having targeted mental health and drug addiction outreach since tents aren’t as prevalent of an issue in this location. They created a Unified Command System (UCS), which is a command system that’s a national model on staying organized for emergencies, for the City on homelessness. This command system is located at the Department of Emergency Management.

In January of 2018 the City created the Healthy Streets Operation Center (HSOC). This coordinated effort involves the police, public works, public health, the homeless department and the city’s 311 system, as well as the city controller, city administrator and the Mayor’s Office of Housing. Again, there is no non-profit homeless service providers, advocates or people experiencing homelessness part of this effort.

The command center is tasked with addressing the issue of dispatching appropriate responders to incidents related to homelessness. Up until now there have been two paths used for reporting incidents, 311 and SFPD’s non-emergency line, but the two paths have not been in communication with each other. Now all the homeless related calls will be routed to the command center and they are dispatching calls to the appropriate responder from that location.

Dispatch protocol needs restructuring so that police aren’t first responders to someone in need of help from a social service provider. It’s not the role of law enforcement to be tasked with these things, but they have been put in this role. We need to quit kidding ourselves into believing that we can arrest our way out of this housing crisis or that anything is resolved by telling people to “move along”.

There needs to be community involvement. There needs to be transparency. Law enforcement and City agencies cannot just do whatever the hell they want. The issue is not “visible homelessness”, the issue is that people are forced to sleep on the streets because our government has failed to provide the basic human right to housing.