Welcome to the very first Oregon Homeless Bill of Rights newsletter! We are reaching out to our Oregon community with some important news and with the hopes of staying connected with you all during these difficult times and struggling together for justice for all! If you want to know about the Homeless Bill of Rights and who we are, visit wraphome.org.
Also, if you want to make a donation for the campaign – you can do that here – thank you!

First and foremost, we think Measure 101 is a REALLY important Measure and we hope you do too!
STREET ROOTS Editorial: Vote yes on Measure 101 for all Oregonians 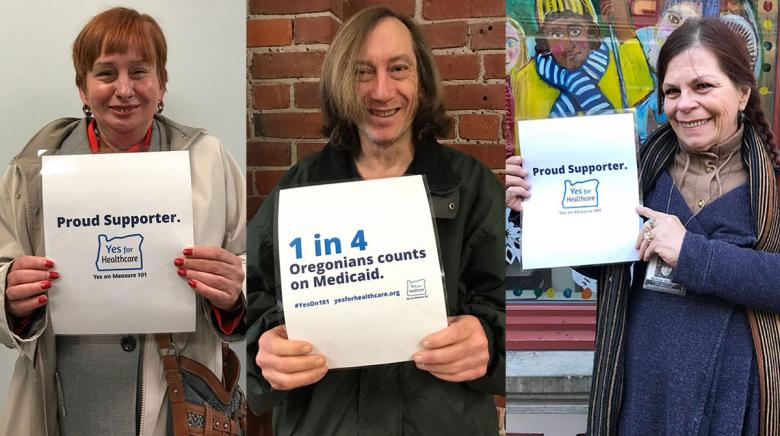 For every dollar spent on health care, there are immeasurable savings down the line

First do no harm. That’s a centuries-old tenet when it comes to health care. It’s worth keeping in mind when it comes to Measure 101, which asks voters to ensure coverage for hundreds of thousands of Oregonians, or let the bottom drop out and hope for something better.

Measure 101 is the Republican response to the Democrat-supported House Bill 2391. That bill was approved by the Oregon State Legislature and signed by Gov. Kate Brown last year. Among other things, it established temporary assessments on insurance companies, some hospitals, managed care organizations and the benefit plan for public employees.

The assessments – or taxes – are part of the package to continue funding Oregon’s Medicaid expansion in the Affordable Care Act – approximately 350,000 Oregonians. Some of the funding is earmarked to stabilize insurance premiums for individuals and families.
Three Republican lawmakers circulated a petition that garnered enough signatures to send the assessments to the ballot for a special Jan. 23 election.
Opponents of the measure say the cost will simply be passed on to consumers, and that is a valid concern. Insurance companies are allowed to increase premium rates up to 1.5 percent as a result of the assessments. But if Measure 101 fails, consumers will also bear the burden of a $500 million gap in the state’s Medicaid program. And when matching federal funds are factored in, we’re looking at an estimated $1.3 billion negative impact in the 2017-19 budget. That’s a lot of money – and lives – on the table.
READ FULL ARTICLE

Do you want to host WRAP for a discussion on ending criminalization?
We have a traveling presentation and discussion to understand the roots of criminalization of people who are poor and homeless, discuss what is happening in different communities and how to end this human rights abuse. If you are interested in hosting a discussion in your organization and/or community in Oregon, email mbeemer@wraphome.org

The Poor People’s Campaign: A National Call for Moral Revival is bringing together people across the country who are organizing to build a broad and deep national moral movement-led by the poor, impacted, clergy and moral agents and reflecting the great moral teachings-to unite our country from the bottom up.
In the Spring of 2018, the Campaign will launch with 40 days of moral action, from May 13th until June 21st, in at least 25 states and Washington D.C. Oregon is one of those states!
By engaging in coordinated and collective nonviolent civil disobedience and direct action across the nation, we will confront the enmeshed and inseparable evils of systemic racism and other forms of discrimination, poverty, the war economy, and ecological devastation; begin to shift the distorted moral narrative of our nation; advance common demands for transformative change; and build power to continue this fight long after June 2018.
To find out more, go to https://poorpeoplescampaign.org. To find out more about what’s happening in Oregon, and/or to host a discussion, email mbeemer@wraphome.org

Sisters of the Road: We won’t stand for no-sit zones! 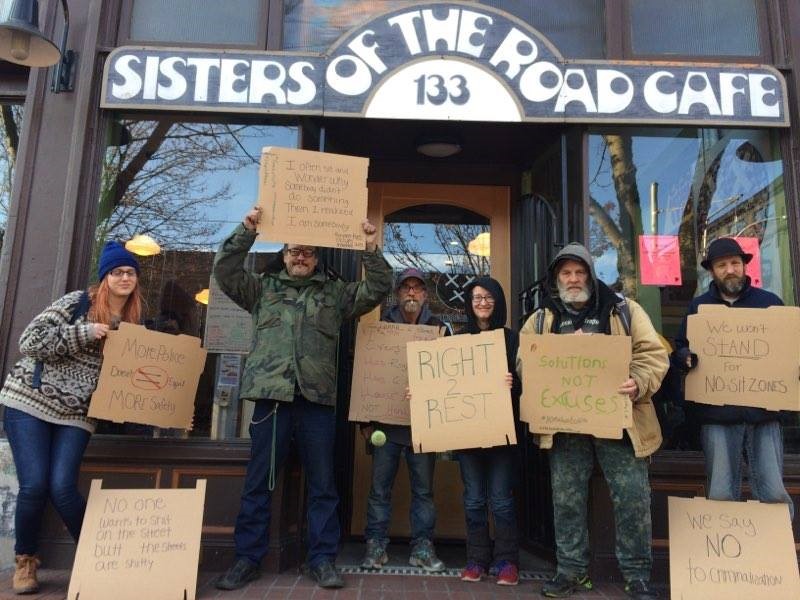 The numbers confirm what people living and working in Portland already know; more and more folks in our community are living without housing, and the solutions the City has taken to alleviating the houselessness crisis aren’t working. We are spending far too many resources trying to fix “visible homelessness,” at the expense of creating real and meaningful change. The latest example: Portland’s expanded “no-sit zones.”

According to the A.C.L.U. Oregon already has 224 laws that disproportionately target those of us without shelter; laws that make life even more difficult than it already is for our unhoused neighbors and which waste energy and resources Portland desperately needs to solve the problems at hand. People are resting on city sidewalks because there is nowhere else to go. There are not nearly enough shelter beds available at night, and even fewer safe and welcoming places for people living on the street to go during the day. Two of five people without housing in our city have no option to go inside for shelter. For others, even available shelter spaces aren’t a real option. For example, almost half of Portland’s housed community is employed and some of those people work nights so overnight shelters are not an option. But really, no one who is living on the street, in a crowded shelter or in a car is getting enough sleep or has a reliable and safe place to be.

The result is that tired people struggling to rest are constantly shuffled around the city by private security and police. They are constantly threatened with citation or arrest and with the ever-present possibility of losing all that they have, including important keepsakes, IDs, medicines and basic survival equipment, in indiscriminate sweeps. We have criminalized survival as a means of sweeping a crisis out of sight rather than addressing it. No sit zones are offensive displays of exclusion that results in targeted removal of unhoused neighbors by security and police. People are told to move along, but to where?

The solution to “visible homeless” isn’t to criminalize it. No-sit zones, sweeps, etc. are cruel, expensive and they don’t work. The solution to crowded sidewalks is the creation of more safe places for people to go and to rest. The solution for litter and unsanitary conditions is waste removal and more hygiene facilities specifically available for people who might not have extra money for a cup of coffee to get a restroom code. The solution to make-shift shelters and encampments is more low-income and transitional housing. Let’s build more Portland Loos, provide rest spots with Port-O-Potties, and incentivize businesses to open their doors and restrooms to people who just need a place to be. Let’s come together as a community to identity land where people can safely camp. Let’s open our 15 community centers to those in need of a shower.

If we want to solve the problems we face (and they are certainly solvable) we need to develop real compassion. At the absolute minimum, we need to provide people with what they need to survive rather than punishing people for simply trying to get by. But to make a real difference we need to move past tolerance and charity towards hospitality and neighborliness. Whether we are lucky enough to have a roof over our head or not, we are all Portlanders. As the cold creeps in, we, as neighbors and citizens of this City have an obligation to look out for each other. The best way to care for each other isn’t to create more regulations. It’s to ask one another, “what do you need?” It’s to take the time to look each other in the eye and share our stories. When we start to get to know each other we will start to build a stronger community, and a strong community is our best hope for making Portland a better place for everyone.

Please contact karissa@sistersoftheroad.org
The Portland Police (Po-Po) are spying on us! If you are from Portland or living here, tell Portland City Council to withdraw from the Joint Terrorism task force where Oregonians are being surveilled and profiled based on our political, religious, or social views, or based on our real or perceived immigration status
Tell the Portland City Council to Withdraw from the JTTF
Below is one of a series of articles from Street Roots highlighting folks from rural Oregon. Let us know what you think!

Street Roots: Homeless in Coos Bay: Up close and personal
Accessing food, shelter and employment can be especially challenging in a rural community. Sara and her 10-year-old son know this firsthand.
by Arkady Brown

One woman, one 10-year-old boy, two cats, two dogs, all living in a van in a Walmart parking lot. 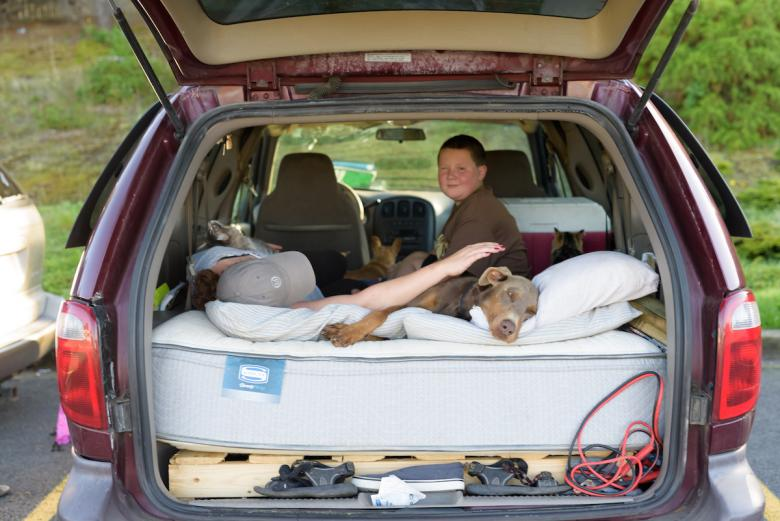 This is what home looks like for Sara Moore and her son, Josh. Homelessness is widespread across Oregon. We all see it, but what many people don’t understand is the daily struggle and juggle of surviving. Sara’s story started in Portland when she and her son were evicted from their apartment in July. After chasing one lead to another, they found themselves in Coos Bay and decided to stay. Sara wants people to understand something about homelessness: “It’s way harder than people assume to get out of it once you’re in it.”
For most homeless individuals, the priority is finding shelter, a job and food. In most rural places, these resources are incredibly limited and underfunded. This is how it affects people experiencing homelessness on a personal level.