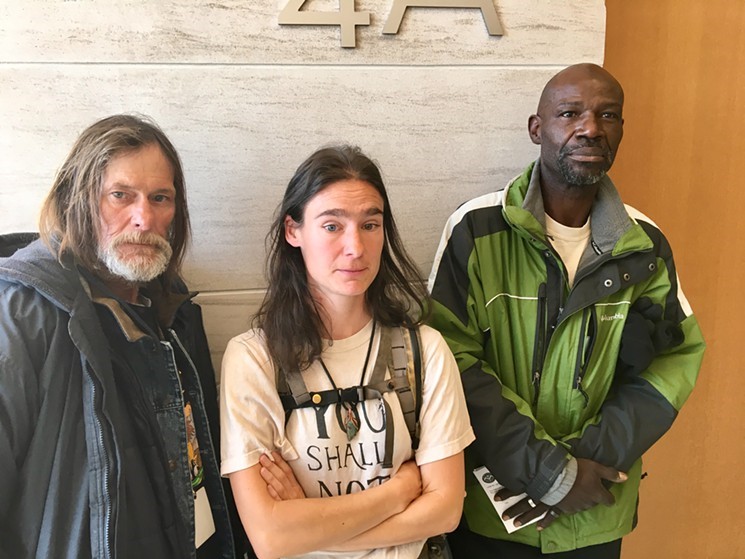 The new trial date is scheduled for April 5th, 2017. Mark your calendar.
Yesterday there was a dispositive motions hearing in the Camping Ban criminal cases where homeless and poor people are being charged with crimes for sleeping on the streets with blankets and shelter in Winter. The hearing was noteworthy for the bias and prejudice shown toward Defendants by the Court.1)At the start of the hearing, prior to any argument, the Judge looked at Defense counsel and said: “The one thing I don’t want is any drama from you, Mr. Flores-Williams.” Defense counsel had never practiced in this court.
2)Without allowing any substantive legal argument, the Court ruled that it was permissible for theProsecution to file a 34-person witness list eight days after the court’s deadline and only two weeks prior to trial.
3)The Court then Excluded all of Defense’s expert witnesses without hearing or testimony, saying that “Homelessness has nothing to do with this case.”
4)The Court then ordered Defense counsel to limit all arguments so that no argument or line of questioning could be construed at trial as an attempt to persuade the jury that the Camping Ban ordinance is itself unjust.
5)At this juncture, defense counsel cited to Fed R. 37(c)and its CO equivalent concerning the prejudice resulting from late disclosure of witnesses. No court response. Defense counsel then quoted from sections from Chambers v. Mississippi, a landmark 1973 civil rights case concerned with due process in which the overall prejudice to defendants becomes so cumulative and egregious that defendants fair trial rights are eviscerated. No response.
6)The Court then took up a Motion from the prosecution that does not exist. A “Res Gestae/404(b) Motion” that wrongfully conflates two different types of evidentiary concepts and underlying analyses. Res Gestae is concerned with the natural narrative of a case. Example: someone robs a liquor store, the fact that they stopped at two bars and to pick up their weapon on the way to the robbery. 404(b)has to do with a very specific set of factors that a defendant leaves at various crime scenes as identifiers. Not to be rude, but the classic example is when serial killer leaves identifiers at numerous crime  scenes showing his m.o. The court conflated these two very different legal concepts and construed the “Res Gestae/404b” motion as allowing the prosecution to offer proof of Defendants’ mental states, but not the fact that defendants were homeless. (If this seems like 2+2=5, Wintston, they are….)(The court also disregarded that the motion was filed late and that it was amended without leave of court.)
7)Defense counsel then objected to the fact that the court had asked the prosecution for their jury instructions without asking defense for their jury instructions, and now was reverse injuring the court’s ruling from the prosecutions jury instructions. Objection overruled.
8)Defense counsel made oral motion for the judge to recuse, i.e. that he Judge take herself off the case for bias against defendants. Denied.
9)Defense counsel cited to several cases concerning due process rights, wrongful exclusion of defense witnesses, and the right to fairly address criminal accusations. No response.
10)Defense requested findings of law and fact – none given.
11)Defense counsel asked for a stay of the proceeding to file an interlocutory appeal regarding the court’s rulings.
12)Court stated that interlocutory orders cannot be appealed from municipal court so that none of the court’s decisions are reviewable.
13)Court ruled that the prosecution’s disclosure of 95 police body cameras three days prior to the hearing was permissible, then scolded defense for not reviewing the 95 videos prior to hearing.Defense counsel, concerned that the court would issue sanctions if he responded, had no comment.
We are now seeking an interlocutory appeal of the Court’s rulings.
The trial is scheduled for April 5th, 2017. Mark your calendar.
Denver Homeless Out Loud
info@denverhomelessoutloud.org
720-940-5291