The enforcement of the camping ban, now known as the survival ban, across the city has not stopped since the city came in full force on Monday last week. The Mayor is still directing police to drag net the whole city to enforce the camping ban. And now it is in hidden corners all over the city where people are scattered and often alone. Police have been waking many people up on these cold nights in hidden corners telling them they must move or their belongings will be taken as evidence of breaking the camping ban.

On Monday 12/5 we took over the whole public comment period at city council with homeless people and others sharing what is going on and pleading for an end to the survival ban.At this meeting Councilmen Albus Brooks told media, “I have zero calls — complaints — about how the city is enforcing the cleanup. I have 100 calls about how we’re not doing enough.” So it sounds like Councilmen Brooks needs to hear from the people about our concerns – complaints – with the enforcement of the camping ban.

Call Councilmen Albus Brooks (dist 9) and tell him you are not ok with the enforcement of the camping ban!!
Phone: (720) 337-7709
Email: albus.brooks@denvergov.org 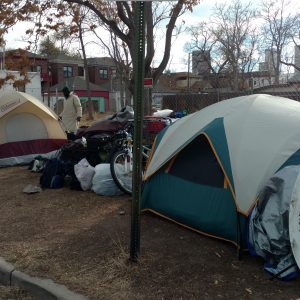 Also… It is COLD!! We can really use warm gear… (i.e. tents, sleeping bags, tarps…) Bring some by our office at 415-517-5603 if you can!
See some of the media from our public comment at City Council and Rally for the Parade of Rights here:
http://kdvr.com/2016/12/05/homeless-enforcing-camping-ban-means-taking-sleeping-bags-blankets/
http://www.denverpost.com/2016/12/05/homeless-sweeps-denver-city-council-repeal-camping-ban/
http://www.denverite.com/denver-camping-ban-homeless-sleeping-bags-evidence-cold-outside-24367/
http://www.unicornriot.ninja/?p=11721
***
Denver Homeless Out Loud Main Meeting
Join us for our weekly main DHOL meeting this Wednesday 12/7 4:45-7pm
at our DHOL office space is at 2260 California St Denver CO, 80205! (The cool purple building on Park Avenue and California – shared with Centro Humanitario)
—
Working Group Meeting Times
Villages:
Meets every Tuesday 5pm whole group at the DHOL office
Get Loud:
Meets Tuesdays and Fridays 1pm-3pm at the DHOL office
Homeless Bill of Rights:
Meets every Wednesday at 2:30pm at the DHOL office