The Deck Is Stacked: Vote NO on Q
a new mural on Clarion Alley

Clarion Alley Mural Project (CAMP) along with The SF Poster Syndicate is pleased to announce a new mural on Clarion Alley — The Deck Is Stacked: Vote NO on Q. Without input from homeless people or the broader homeless and service providers community, Supervisors Farrell and Wiener, funded in large part by billionaires Sequoia Capital chairman Michael Moritz, tech angel investor Ron Conway, and hedge-fund investor William Oberndorf, introduced last minute ballot measures deceptively named “housing not tents” and “Neighborhood Policing” that would single- handedly undermine the Mayor’s highly anticipated Department of Homelessness’ efforts and visions. According to Jennifer Friedenbach of the Coalition on Homelessness, “Prop Q and R do not create additional housing or beds—they simply continue the status quo, by shuffling people from block to block after the meager offer of one night in shelter. San Francisco currently has multiple year waits for public housing, and over 800 people are languishing on the shelter waitlist today alone. Homeless Campers have nowhere to go, and without housing, Prop Q will fail miserably”

The San Francisco Poster Syndicate is an organization of faculty, students and former students at the San Francisco Art Institute. We make political prints for many specific issues in the Bay Area. We grew out of the crisis around higher education – student debt and the abuse of adjunct faculty. We are here to bring art and design to many different people’s movements in hopes that their message can be heard and seen more loudly.

The Mission of CAMP is to support and produce socially engaged and aesthetically diverse public art as a grassroots community based, artist run organization in San Francisco. Throughout its history Clarion Alley Mural Project (CAMP) has used public art as a force for those who are marginalized and a place where culture and dignity speak louder than the rules of private property or a lifestyle that puts profit before compassion, respect, and social justice. Clarion Alley runs one block in San Francisco’s inner Mission District between 17th & 18th and Mission and Valencia streets. 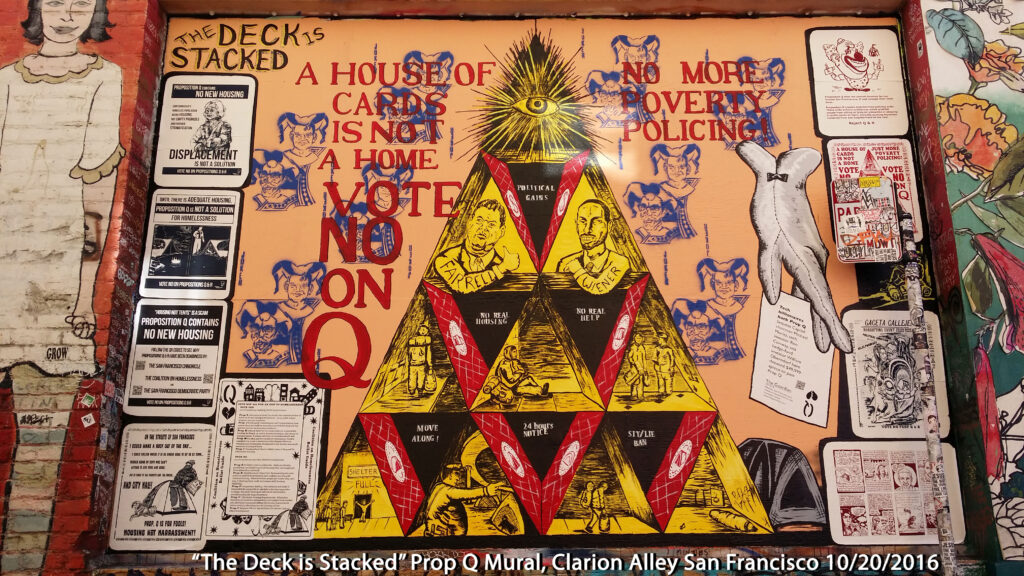