Janny Castillo, once homeless with her four young children, has become a masterful organizer and multi-media expert in our community. Janny works at St. Mary’s Center in Oakland as the Hope and Justice Coordinator and worked at Building Opportunities for Self-Sufficiency (BOSS) for many years where she served people as a housing advocate, educator and organizer. Janny is also a Reiki Master and Deeksha blessing giver. She can often be found behind a camera documenting movements for social justice. 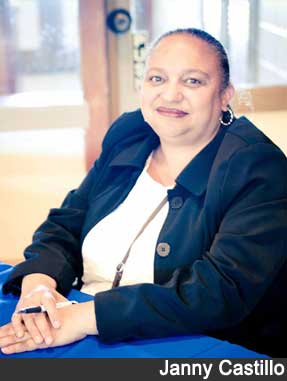 How long and in what capacity have you been involved with WRAP?

I participated in the early meetings of WRAP in 2005 when we designed the structure and the campaigns. In the beginning I helped with administrative work, outreach within our organization then with other organizers to other local groups. Years later, I helped organize a major affordable housing action in San Francisco with WRAP.

Since the beginning, I have helped produce media for WRAP campaigns and I currently organize seniors at
St. Mary’s Center to participate in legislature visits and actions associated with the Homeless Bill of Rights Campaign.

Why do you think WRAP is important?

Anti-homeless, anti-poor laws are rampant and growing across the US and are causing great harm to the people they target. Ending homelessness is talked about but all levels of government resist dedicating resources to effectively house the massive numbers of individuals and families who are forced to live outside.

WRAP’s work is important because it has brought local and national attention to the civil rights abuses that people living outside face every day. We will continue to have homelessness in epidemic proportions for many, many years to come, and it is a disgrace that on top of dealing with the debilitating experience of homelessness, people also have to deal with inhumane, discriminatory practices that serve those that merely want them out of sight, out of mind.

What would be different if WRAP did not exist?

Homeless people would not have a voice and they would have very few places to go to find help. The abuses would continue unseen and unchecked. We would not be united as a grassroots movement across three states to address the criminalization of homelessness and to fight for affordable housing. 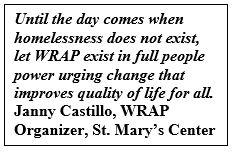 I remember being moved to tears when I heard the story that General Dogan (from LA CAN) told about the homeless woman who became distraught and severely traumatized when she tried to retrieve her mother’s ashes from a dump truck that had come to remove the belongings of homeless people from a skid row street. The officers refused to help her. I understood then that people can viciously and callously abuse their power, especially those who claim they are here to protect and to serve us. It was a heart opening experience and one that fuels my desire to fight for the Right to Rest Act. That is why WRAP is so important.

What is your hope for WRAP for the next 10 years?

My hope for WRAP is that we never stop fighting for the unseen to be seen and heard and for the poor to be treated with dignity and respect. My hope is that through WRAP’s work, real help will finally arrive in the form of humane government policies that provide deeply affordable housing and protect our people from being harassed, abused or incarcerated. Until the day comes when homelessness does not exist, let WRAP exist in full people power urging change that improves quality of life for all.

Thank you, Janny and thank you to all of you for all you do to support WRAP, and an end to the criminalization of people who are poor and homeless. We can’t do all we do without you!